Hispanic Americans in the Korean War

When the Korean War broke out, Hispanic Americans again answered the call to duty as they, their brothers, cousins, and friends had done in World War II. Many of the Hispanic soldiers who fought in Korea were members of the all-Hispanic U.S. Army unit to serve in the Korean War, the 65th Infantry Regiment. 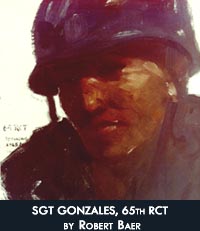 On August 25, 1950, the Korean War was two months old when the U.S. 3d Infantry Division's all-Hispanic 65th Infantry Regiment, nicknamed "The Borinqueneers," embarked on two transports in Puerto Rico, passed through the Panama Canal, and sailed directly for Korea. The regiment was named after the Borinqueneers, one of the original Indian tribes that inhabited Puerto Rico. Many members of the 65th were direct descendants of that tribe. The 65th disembarked September 23 at the port city of Pusan on the Korean Peninsula's southern tip, where U.S. forces had been holding the Pusan Perimeter against the invading North Korean Peoples Army (NKPA). Sent into action immediately, the 65th took part in the U.S. breakout and drive to the north. Following the surprise landings at Inchon, U.S. and other United Nations forces drove deep into the mountains of North Korea.

In late October 1950, a huge Chinese Army entered the war. The Eighth U.S. Army was overrun, and the U.S. 1st Marine Division, with attached U.S. and British Army Units, was surrounded by an enemy force estimated to be four Chinese armies at Hagaru-ri, near the lower end of the Changjin (Chosin) Reservoir. In one of the greatest fighting retreats in history, the outnumbered Marines battled their way southeast to the coast. The 65th Infantry Regiment, along with other elements of the 3d Infantry Division, was assigned to protect the 1st Marine Division's withdrawal from Hagaru-ri and later the perimeter around Hungnam Harbor as United Nations forces evacuated the area aboard troopships. The 65th and other remaining elements of the 3d Infantry Division sailed from Hungnam on Christmas Eve, 1950.

The men of the 65th Regiment landed in Pusan, as they had five months before, and again fought their way northward. Late January 1951 found the regiment below the South Korean capital of Seoul, under orders to take two hills being held by the Chinese 149th Division. The assault began on January 31st and took three days. On the morning of the third day, with the top of the hills within reach, two battalions of the 65th Regiment fixed bayonets and charged straight at the enemy positions. The Chinese fled. The regiment is credited with capturing 2,086 enemy soldiers and killing 5,905.

During their service in Korea, the men of the 65th Infantry Regiment won four Distinguished Service Crosses and 125 Silver Stars. "The Borinqueneers" also were awarded the American Presidential and Meritorious Unit Commendations, two Korean Presidential Unit Citations and the Greek Gold Medal for Bravery.

Corporal Rodolfo P. Hernandez, a member of Company G, 187th Airborne Regimental Combat Team, was awarded the Medal of Honor for his selfless action that occurred on May 31, 1951, near Wontong-ni, South Korea. His platoon, in defensive positions on Hill 420, came under ruthless attack by a numerically superior force accompanied by heavy artillery, mortar, and machine gun fire which inflicted numerous casualties on the platoon. His comrades were forced to withdraw due to lack of ammunition but Corporal Hernandez, although wounded in an exchange of grenades, continued to deliver deadly fire into the ranks of the onrushing enemy soldiers until a ruptured cartridge rendered his rifle inoperative. Immediately leaving his position, Corporal Hernandez rushed the enemy armed only with rifle and bayonet. Fearlessly engaging the foe, he killed 6 of the enemy before falling unconscious from grenade, bayonet, and bullet wounds, but his heroic action momentarily halted the enemy advance and enabled his unit to counterattack and retake the lost ground.

Corporal Benito Martinez, a member of Company A, 27th Infantry Regiment, 25th Infantry Division, was awarded the Medal of Honor posthumously for his sacrifice in an action that took place on September 6, 1952, near Sataeri, South Korea. While manning a listening post forward of the main line of resistance, his position was attacked by a hostile force of reinforced company strength. In the bitter fighting which ensued, the enemy infiltrated the defensive perimeter and, realizing that encirclement was imminent, Corporal Martinez elected to remain at his post in an attempt to stem the onslaught. In a daring defense, he raked the attacking troops with crippling fire, inflicting numerous casualties. Although contacted by sound power phone several times, he insisted that no attempt be made to rescue him because of the danger involved. Soon thereafter, the hostile forces rushed the emplacement, forcing him to make a limited withdrawal with only a Browning automatic rifle and pistol to defend himself. After a courageous 6-hour stand and shortly before dawn, he called in for the last time stating that the enemy was converging on his position. His magnificent stand enabled friendly elements to reorganize, attack, and regain the key terrain.

Sergeant Joseph C. Rodriguez, a member of Company F, 17th Infantry Regiment, 7th Infantry Division, was awarded the Medal of Honor for his action in a battle that ensued on May 21, 1951, near Munye-ri, Korea. Sergeant Rodriguez, an assistant squad leader of the 2d Platoon, was participating in an attack against a fanatical hostile force occupying well-fortified positions on rugged commanding terrain. His squad's advance was halted within approximately 60 yards by a withering barrage of automatic weapons and small-arms fire from 5 emplacements directly to the front and also the right and left flanks, together with grenades which the enemy rolled down the hill toward the advancing troops. Fully aware of the odds against him, Sergeant Rodriguez leaped to his feet, dashed 60 yards up the fire-swept slope and, after he lobbed grenades into the first foxhole with deadly accuracy, ran around the left flank, silenced an automatic weapon with 2 grenades and continued his whirlwind assault to the top of the peak. He then wiped out 2 more foxholes and when he reached the right flank, tossed grenades into the remaining emplacement that destroyed the gun and annihilated its crew. Sergeant Rodriguez's intrepid actions exacted a toll of 15 enemy dead and, as a result of his incredible display of valor, the defense of the opposition was broken,the enemy routed, and the strategic strong point secured.

Office of the Deputy Assistant Secretary of Defense for Military Manpower and Personnel Policy, Hispanics in America's Defense, November 17,1988.