Thousands of soldiers have fought in battles throughout America's history, but only a handful of them are recognized for their gallant actions and loyalty to their nation.

The U.S. Postal Service recognized four veterans from World Wars I and II during the stamp unveiling ceremony Wednesday morning at the Pentagon's courtyard.

"The Postal Service takes great pride honoring four courageous Americans with the issuance of these stamps," said Honorable Einar Dyhrkopp, chairman of the Postal Service Board of Governors.

Hines fought in the Spanish American War and was part of the battle of San Juan Hill. He was awarded the Distinguished Service Medal for his bravery and leadership in combat during World War I. He later became the Army Chief of Staff in 1924. He died at the age of 100 in 1968 at the Walter Reed Army Medical Center.

York, a Christian fundamentalist, was awarded the Medal of Honor for his courageous acts. during World War I. He served with the 82nd Airborne Division. In one battle with the German army, York was credited for capturing 132 German soldiers, killing 25 German soldiers and silencing 35 enemy machine guns.

Allied Commander Marshal Ferdinand Foch described his courageous act as "the greatest accomplished by any soldier of all the armies of Europe."

Bradley commanded the First U.S. Army during the 1944 Allied landing in Normandy during World War II. He served as the Army Chief of Staff in 1948 and became the first Chairman of the Joint Chiefs of Staff in 1949.

Murphy was the most decorated American combat soldier in World War II. He was awarded the Medal of Honor for saving the soldiers in his company by single-handedly repelling a German attack.

The heroism and leadership of these veterans are now valued on the postage stamps.

On behalf of the U.S. Postal Service, Dyhrkopp and Secretary of the Army Honorable Louis Caldera unveiled the stamps at the ceremony.

"They are the true treasures of our nation," said Caldera. to the audience. He said the four soldiers are etched in our memories on the stamps. Caldera added that the stamps also, honor the soldiers who serve in the military.

For the soldiers who've fought in wars, "We (U.S. Postal Service) cannot honor everyone of them by name," said Dyhrkopp, so the stamps honor them as well.

Like most military ceremonies in the Fort Myer Military Community, the 3rd U.S. Infantry (The Old Guard) presented the colors during the "National Anthem,' which was played by the U.S. Army Band "Pershing's Own." The band also played the popular "Army Song' at the ceremony's close to reflect on the soldiers' values who fought in wars.

After the ceremony, the Association of the United States Army sponsored the ceremony's reception that involved cake and punch which put smiles on the faces of guests and family members of stamp honorees.

The stamps were also available for purchase during the reception. The stamps can be purchased at the local post office or online at www.stampsonline.com.

"I know that these four men hold a special place in the hearts of many Americans," said Dyhrkopp. "It is a fitting tribute that their dedication and bravery will forever be remembered on U.S. postage stamps." 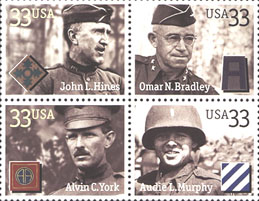