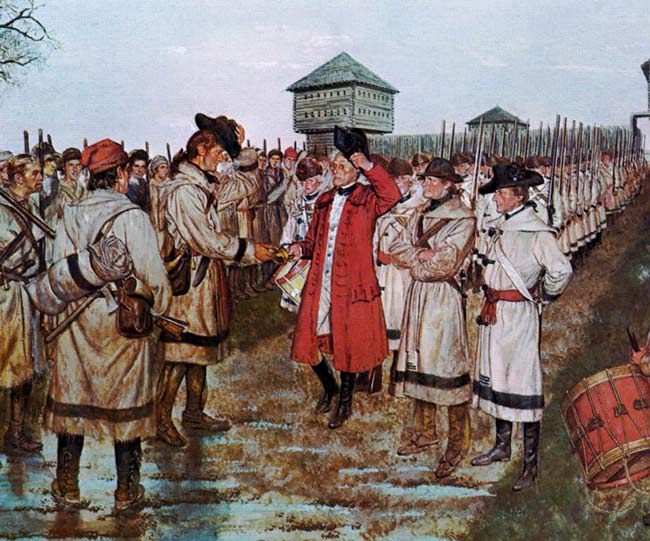 Warfare between frontiersman and Indian increased in intensity during the Revolution. The British from posts at Niagara and Detroit encouraged Indian attacks that harassed the westernmost settlements. In mid-1778 George Rogers Clark with about 175 to 200 men set out on an expedition sponsored by the Commonwealth of Virginia with the ostensible purpose of defending Kentucky but with secret orders to take the British posts in the Illinois country and if possible, Detroit. In July 1778 by surprise moves and by winning the sympathy of the French settlers he captured Vincennes and Kaskaskia without firing a shot.

In December 1778 Colonel Henry Hamilton, the British commander at Detroit, retaliated, recapturing Vincennes and rebuilding the dilapidated Fort Sackville there. Clark, determined not to have Vincennes remain in British hands, started out on a bold 180-mile mid-winter march from Kaskaskia to retake the fort. Fording and ferrying numerous icy streams and flooded rivers, Clark and his nearly starved men reached Vincennes on 23 February 1779. He warned the inhabitants of his approach and marched his men back and forth with many flags to create the impression of an overwhelming force. The French welcomed the Americans and the Indians fled into the woods.

After a brief fight Hamilton agreed to surrender, and on the 25th marched his garrison from the fort between two companies of frontiersmen. Looking around as he presented his sword to Clark, Hamilton is said to have exclaimed, "Colonel Clark, where is your army?" At the same moment two other American companies entered Fort Sackville and raised the American flag.

Clark was unable to achieve his goal of capturing Detroit and did not completely halt Indian attacks on Kentucky, but his amazing exploits strengthened American claims to the Northwest territory.