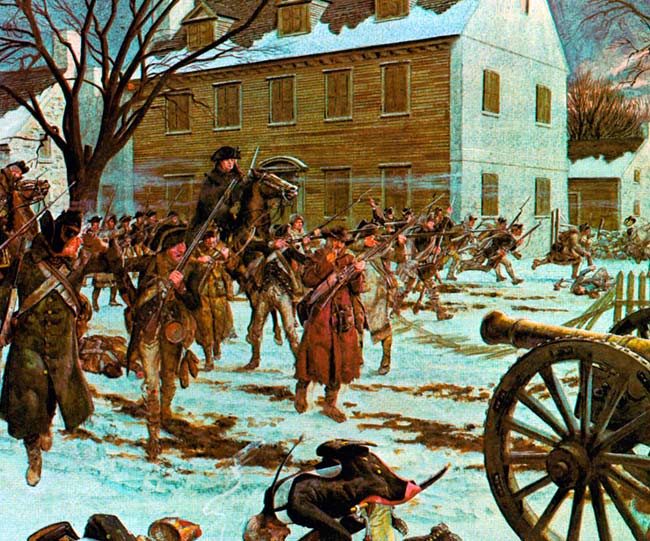 The winter of 1776 was the bleakest of what had become a War for Independence, a time that indeed "tried men's souls." The victorious British had driven General George Washington and his army of Continentals and militia from New York. Confident that the ill-clad and ill-fed Americans would fade away when enlistments expired at the year's end, General William Howe withdrew a major portion of his force from New Jersey to the comforts of Manhattan island. Washington realized his army's only chance of survival lay in a victory over the remaining scattered garrisons of the British and their Hessian mercenaries.

On Christmas evening Washington's ragged American army left its encampment and crossed the Delaware River in a driving sleet and snow storm. At dawn, 26 December 1776, the near-frozen Continentals surged into Trenton catching the Hessians, weary from the previous night's celebration, by surprise.

Colonel Johann Rall, the garrison commander, attempted to form a line of defense on King and Queen Streets with two regiments and the Knyphausen battery. Aware of Rall's plans, the Continentals, supported by General Henry Knox's artillery and heartened by the presence of Washington, overwhelmed the guns at a dead run. The loss of the artillery position caused Rall's regiments to withdraw. Their powder damp, deprived of artillery support, their commander mortally wounded, the surviving Hessians surrendered.

Bolstered by this success Washington was able to keep his army together for several more weeks during which time he again crossed the Delaware and won a victory over the British troops at Princeton. These two engagements assured the survival of a small core of Continentals and, in turn, the survival of the American cause of Independence.