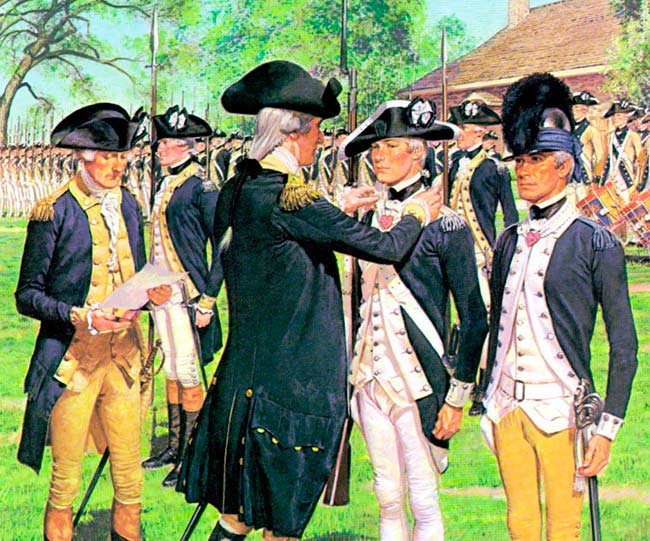 After his victory over the British at Yorktown, Washington established his headquarter at Newburgh where he could keep a watchful eye on the English forces in New York. He hastened to remind his command that peace was not a foregone conclusion and military readiness must be maintained. Washington also continued his efforts to improve the condition of his troops and insure a high state of morale. One of the ways he decided to accomplish the latter was to create, on 7 August 1782, a "Badge of Military Merit" for enlisted men who had performed bravely in combat.

Two men selected by a board of officers to receive this award were Sergeant Elijah Churchill of the 2nd Continental Light Dragoons and Sergeant William Brown, a member of the 5th Connecticut Regiment, Continental Line. Brown, a veteran of 18, had won praise for his bravery in the storming of Stony Point in 1779 and now was cited for gallantry in the trenches before Yorktown. Churchill had distinguished himself during attacks against two forts on Long Island.

On 3 May 1783, these men left the Continental Cantonment at New Windsor and reported to the nearby headquarters of Washington at the Hasbrouck House in Newburgh. There, before a guard mount of the 1st New York, the Commanderin-Chief awarded Sergeant Churchill (pictured on the right) and Sergeant Brown their badges.

Surviving records for the period confirm the presentation of only one other Badgeof Military Merit, and the decoration was not used at all after the end of the Revolutionary War. It was revived in February1932 as the Purple Heart out of respect to Washington's memory and to his military achievements.

The ceremony, however, symbolized much more than recognition of two brave men. It represented the climax of the molding of a citizen army of volunteers and militia into a force that had fought on equal terms with one of the world's best armies, and in doing so, had played a vital role securing freedom and independence for themselves and their fellow citizens.