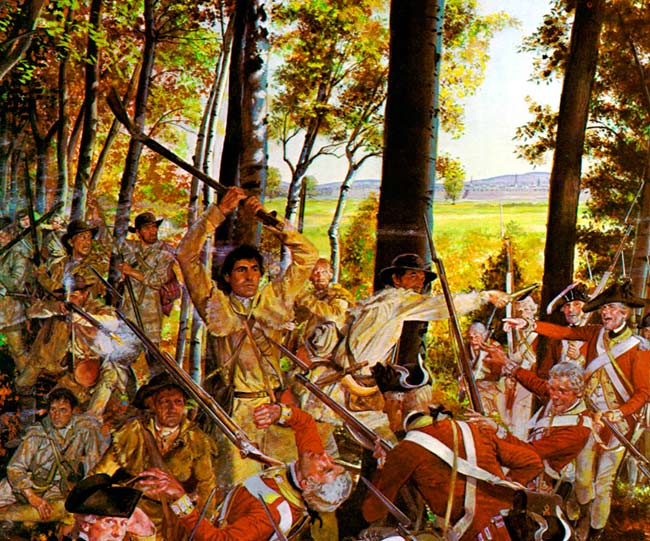 In June 1777 General John Burgoyne set forth on an expedition from Canada with the aim of cutting the rebellious colonies in twain by seizing the Hudson River line. With his main force he advanced toward Albany via Ticonderoga while a smaller force under Colonel Barry St. Leger moved down Lake Ontario and through the Mohawk Valley. Burgoyne's plans were not coordinated with those of Sir William Howe, the British Commander in New York, who decided to move against Philadelphia instead of attacking north along the Hudson.

Initially successful, Burgoyne suffered a crippling blow when General John Stark destroyed a detachment from his force at Bennington. Meanwhile St. Leger was forced to abandon the siege of Fort Stanwix, guarding the Mohawk Valley, and retreated to Canada. Then on 19 September Burgoyne himself suffered a repulse with heavy losses when he attempted to advance on the positions manned by the main American Army under General Horatio Gates.

Three weeks later, on 7 October 1777, Burgoyne sent out an advance force and Gates moved up Colonel Daniel Morgan's riflemen and other units to meet it. In the ensuing battle (usually known as Bemis Heights) Morgan's men, well adapted to the wooded terrain, took a fearful toll of British lives with their Kentucky rifles. One of the casualties was the fearless British General Simon Fraser. According to tradition Morgan, spotting the general, ordered one of his men, Tim Murphy, up a tree, saying that although he admired the Englishman, "it is necessary he should die, do your duty." Murphy's third shot inflicted a mortal wound.

Soon after Fraser's fall, Burgoyne withdrew and several days later, on 17 October, surrendered his army near Saratoga. The capitulation was a turning point of the war for it induced the French to sign a military alliance with the infant American Republic in February 1778.