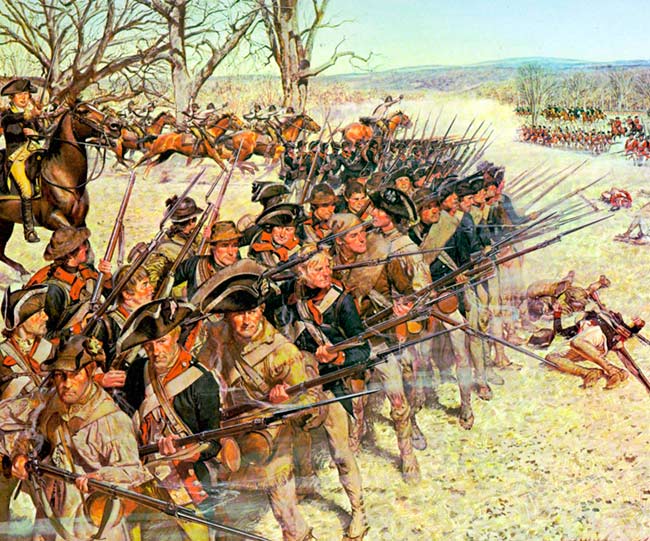 General Nathaniel Greene assumed command of the remnants of the Southern Army after Horatio Gates' disastrous defeat at Camden. In his ensuing campaign against Lord Cornwallis he sought to gain strength while harassing British forces and drawing them further from their bases on the coast. His position immensely strengthened by Daniel Morgan's victory at Cowpens (17 January 1781), Greene skillfully retreated before Cornwallis' force and finally, his ranks swollen by militia, gave battle on grounds of his own choosing at Guilford Court House, N.C.

Greene deployed his forces in three lines. The first was composed of North Carolina militia whom he asked to fire several volleys and retire; the second was made up of Virginia militia; the third, posted on a rise of ground, comprised Virginia, Maryland, and Delaware Continentals.

When Cornwallis' Regulars launched their attack, the first line of militia fired their rounds and fled the battlefield, the second line offered stiffer resistance but also withdrew. Before the second line gave way, several British units broke through and charged the last line. Greene observed as the veteran First Maryland Continentals threw back a British attack and countered with a bayonet charge. As they reformed their line, William Washington's Light Dragoons raced by to rescue raw troops of the Fifth Maryland who had buckled under a furious assault of British Grenadiers and Guards.

Finally Greene ordered a retreat, since he was determined not to risk the loss of his army. For the British it was another Pyrrhic victory. Cornwallis, his force depleted, withdrew to the coast at Wilmington and then went on to his rendezvous with destiny at Yorktown. Greene, while losing two more such battles, by October 1781 had forced the British to withdraw to their last enclaves in the South — Charleston and Savannah.