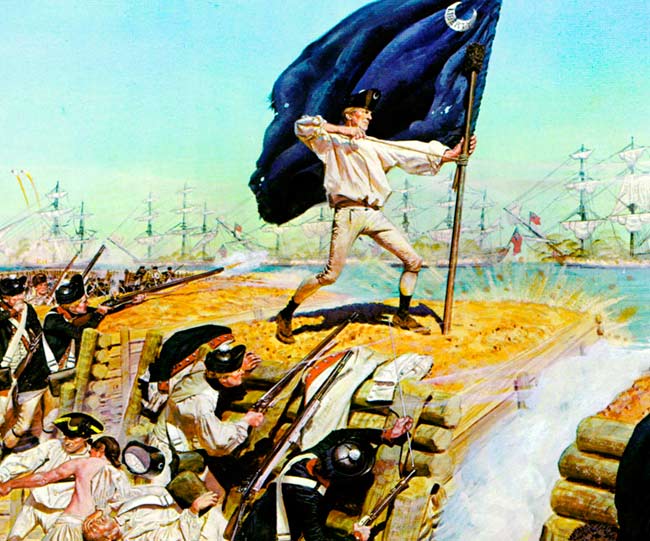 Because of a sand bar the British delayed their attack on Charleston until 28 June 1775 while they lightened ship. Clinton's 2,000 British soldiers, landing on adjacent Long Island, were unable to cross an estuary to join in the attack. The fleet began its bombardment at a range of about 400 yards. Low on powder, Moultrie directed his men to fire slowly and accurately in reply.

During the engagement a shell struck the flagpole, and the blue South Carolina banner fell outside the fort. Sergeant William Jasper retrieved it and, oblivious to British fire, secured the flag to a makeshift staff.

The falling shells, absorbed by the soft palmetto loge and sand, caused little damage to the fort and few casualties. Even shells that did enter the fort buried themselves in the swampy parade ground. The wooden frigates on the other hand were riddled with shot. One explosion blew away Sir Peter Parker's breeches.

Finally, after more than ten hours of firing, the British fleet withdrew and several weeks later sailed for New York. For three years following the defeat at Charleston the British were to leave the South unmolested and the Southern Tories, who were undoubtedly numerous, without succor.